All too often, I find myself in a situation where just being thankful doesn’t feel like it’s enough. With close friends and people I share my life with, this can be taken care of in it’s own time, and I don’t even need to think about it – just generally be available to help out.

But sometimes I have encounters with wyrd people along my path who do me a huge favour without “breaking a sweat”, or show me kindness in a way which seemed to turn the fates towards me…

My daily adventures usually yield some sort of treasure, and I have to admit I’m somewhat of a hoarder… if I were less nomadic I’d be swimming in found objects.

Creating wards and charms and talismans is something that has long held my interest… I guess because I feel the energies (sometimes neutral like that from repetitive use, or emotionally charged from moments in people’s lives) which people naturally put into things… and that so much of my life’s craft has to do with trying to consciously emulate subconscious mechanisms… 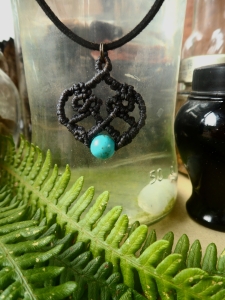 As always when talking about magick, the most important step is to build up and direct the energy which vibes with the intent which is manifesting (at least in my opinion, anyway). This basically means that I won’t be able to manifest a gift of thanks if I’m not really thankful.

A hug and a silent prayer/blessing can be super powerful. I say this because I have felt buzzed from encounters like that, but if I had wished to do something with this energy, the time frame to do so rarely lasted til the next day…

Directing wishes, blessing, or strong emotions into third party objects can allow their effects to be released slowly over time, or at a later date.

This also taps in to the power of memories, or rather the power of being remembered, since a physical object acts as a reminder… it’s latent energies act like bridges through space/time.

Faced with the situation of being filled to burst with gratitude, or having been given a Gift and want to return the favour, the hag/fae/trickster* pulls a small stone from their pocket, and offers it, hidden inside their fist.

When the other person takes it in their hand, their fist is engulfed by the two hands of the h/f/t, and an energetic bridge is formed. The stone is charged through the giving and the grateful parties both;  the whole hearted blessing is passed into the stone through the person to whom thanks are given, so that the energy stored is representative of this moment, of this exchange between two people.

As the h/f/t releases their grip, the other person opens their hand slightly, and catches a glimpse of the charm. Before they can logically assimilate what has happened, the h/f/t snatches it back and gives it a kiss while looking the other person straight in the eyes, and then places the stone back in their hand with a smile and a fairwell.

(* because yes, I am all of those things in my own aggrandized imagination)

Obviously my fantasy is not the only way to do this.

Simply taking the stone and giving it a kiss while directing thanks to the person in question would suffice.

The kiss could easily be replaced or supplemented with an incantation, depending on personal preference.

Personally I think kisses are very magickal, and probably the most discrete way to put something inside myself or get some spit on there in public… saying it like that takes away some of it’s social acceptability, but I guess that’s what makes it feel raw and wild and magick.

The three year old I am caring for regularly comes and asks me to kiss things they have found or which they hold dear, and I believe this to be because they can feel how this changes the energy of the object.

I thought to add to this discussion the idea of Gebo.

The idea that balance is an ideal state, and something to strive for.

The idea that a debt left unpaid will be taxed through the aether.

Many modern thinkers would have us believe that this is an illusion called the “just world fallacy”.

Looking around the world, it is easy to see why someone would think of justice as a fallacy. The people with most economic power have gained it by exploiting the people most willing to give of themselves. The weak rule the strong with threats of violence.

But just because justice isn’t a universal, all exclusive law, doesn’t mean that there are not forces at work which strive constantly for balance and redintigration.

In case you haven’t studied this, Gebo is an ancient norse rune which is believed to be related to gifts, sacrifice, fair trade and heiros gamos.

Maybe justice isn’t guaranteed, but if we have the capacity to strive for it, why not take steps to manifest our ideals?

Fact is never guaranteed, and yet we still strive for understanding…

Even life is not guaranteed, and yet we still strive each day to evade death’s grasp.

Last but Not Least

This post would not feel complete without a little rant about the non-importance of money or even material things when practicing magick or witchcraft.

Maybe straight up meditation isn’t something everyone wants to start with, but without some sort of energy work, our powers of manifestation remain largely subconscious, and potentially more destructive or prone to unwanted side effects…

But even still, the powers are our own, and come from deep within as well as all around us. We are part of an ever changing web of consciousness, and our powers of manifestation flower from our very ability to observe and to react.

Crystals and colours and herbs, for example, all have their own innate vibrations, and of course there is power in the earth and the sun and the wind which we can tap in to, but there is no real need to buy candles or incense or divination tools, or anything else for that matter… these things should be seen as luxurious aids, not necessary tools.

Waste and the unconscious extraction and destruction of natural resources are unavoidable consequences of consuming almost anything produced for the mainstream market. A blessing will not be enough to fulfill the personal responsibility for the distant consequences of our actions if we otherwise choose to be unconscious, and leave the solution to someone else…

We have the power to create this world as we please, if only we can learn to overcome our fears. Why not start now?

My personal quest is to revive the power of the collective sub-conscious! The old gods still live in our spirits, and our powers are begging to be woken! View more posts

One thought on “A Gift of Thanks”

This site uses Akismet to reduce spam. Learn how your comment data is processed.